A year-long restoration project has focused on rehabilitating the tunnels under the Baths of Caracalla in Rome. Visitors will be allowed to wander under the Eternal City’s 11-hectare complex of gyms, saunas and massage rooms – and visit the Mithraeum, the temple built to the God Mithras under the baths. The complex opened the 21st of December – a fitting solstice date for a cult that worshiped the Sun. The Baths of Caracalla were a complex system of chambers, pools and waterways that were active in Rome – they were able to host 5000 visitors a day – for more than 300 years. 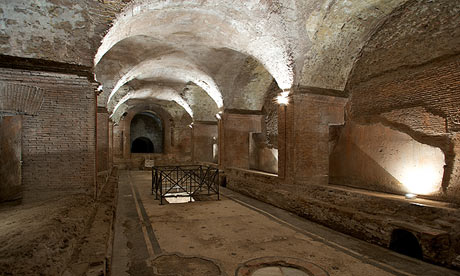 The photo of the temple under the Baths is by Chris Warde-Jones, from an recent article on the restoration in the Guardian.

While much is not known – and what is known is hotly debated to this day – we know from the archeological record that the underground temples or Mithraea appear suddenly in the last quarter of the 1st century AD. Mithras was venerated in his underground temples, all through the Roman Empire; much about the cult of Mithras comes to us only through the reliefs and sculptures found in the temples, and many attempts have been made to interpret this material.

Controversially for some Christians scholars some of the iconography bears … some resemblance to the tenets of the later cult of Christianity. His devotees, performing rituals in the darkly lit underground chambers – while blindfolded, they considered him as the savior, sent to earth to deliver us mortals. It was through him that it was possible for sinners to gain immortal life. He died for our sins, but came to life the following Sunday, he was born of a virgin on December the 25th in a cave, attended by shepherds and became known as the light of the world. He had 12 disciples with whom he shared a last meal – during the rituals his devotees symbolically consumed his flesh and blood, as Sun God he was celebrated on Sundays and he is often depicted with a halo, the high priest was called a Papa, and the religion was centered on Vatican hill in Rome. He was either a roman invention – or according to some some form of the Persian deity Ahriman. The usual depiction of the God – and feature of every Mithraeum – was as a youth, killing a sacred bull. The picture above is one of the characteristic features of the Mithraeums … and a possible depictions of the God himself.

The Wikipedia article on the Mithraic Mystery sheds some … light on the mysterious Mysteries.

The Suda, a “massive 10th century Byzantine encyclopedia of the ancient Mediterranean world” states that “no one was permitted to be initiated into the mysteries of Mithras, until he should show himself holy and steadfast by undergoing several graduated tests.” The God – and the cult – have been of interest to occult groups over the centuries, we post Kipling’s ode to the light-bearer., which we found on a Tumbler blog about the mysterious divinity.

A Song to Mithras by Rudyard Kipling.

Mithras, God of the Morning, our trumpets waken the Wall!
‘Rome is above the Nations, but Thou art over all!’
Now as the names are answered and the guards are marched away,
Mithras, also a soldier, give us strength for the day!

Mithras, God of the Noontide, the heather swims in the heat.
Our helmets scorch our foreheads, our sandals burn our feet.
Now in the ungirt hour—now ere we blink and drowse,
Mithras, also a soldier, keep us true to our vows!

Mithras, God of the Sunset, low on the Western main—
Thou descending immortal, immortal to rise again!
Now when the watch is ended, now when the wine is drawn,
Mithras, also a soldier, keep us pure till the dawn!

Mithras, God of the Midnight, here where the great bull dies,
Look on thy children in darkness. Oh take our sacrifice!
Many roads thou hast fashioned—all of them lead to the Light:
Mithras, also a soldier, teach us to die aright!

The History Blog has several interesting articles on Mithraism and the restored temple under the Baths of Caracalla.