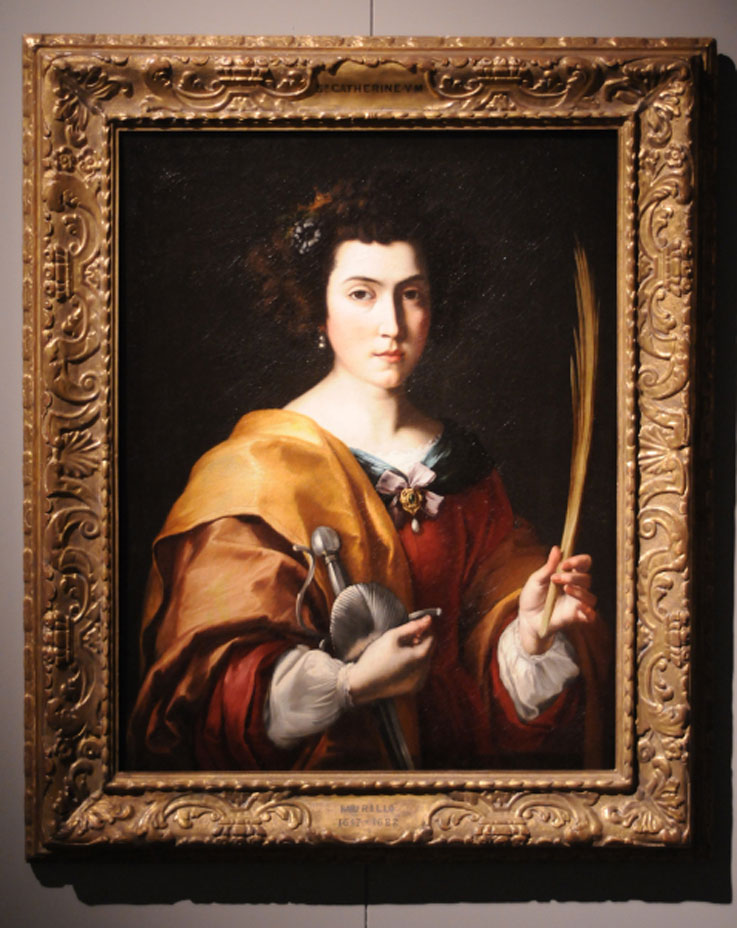 A glaring mis-attribution, by the Art is Life Forensic Art History Department was brought to our attention by a reader, (Thank you Alexandro) … we apologize for any discomfort this shoddy mislabeling may have caused: we’d like to state: as they repeat – like a mantra – in Italy “Ci scusiamo per il disagio.”

The lovely lady pictured above, holding a palm and a sword, is in fact Santa Catalina, and the painter is a young Murillo, showing his considerable chops, and not by the talented Italian contemporary Pietro Da Cortona, as we reported in a previous post. Needless to say we at Art is Life take attribution very seriously, and so heads rolled, or rather, the whole department was publicly whipped with a palm branch and skewered.

The painting of the young woman is a truly wonderful baroque masterwork – we read up on its history and it reads like a detective novel…  many copies were made, testifying to the importance of the painting and much controversy, accusations of theft and international intrigue surround the painting to this day.

We reprint the first part of Benito Navarrete Prieto’s (He is the Scientific Advisor of the Centro Velázquez) piece for the Focus-Abengoa Foundation, which won a claim of ownership to the painting.

Mr Navarrete Prieto’s an expert – and since our staff is … indisposed, we’ll let him at it… take it from the top, Benito:
(you can read the rest of the incredible story on the Focus-Abengoa Foundation, website, linked here.)

“Confused in different foreign collections and attributed to both Zurbarán and Alonso Cano, the Saint Catherine that Focus-Abengoa purchased recently has had a tempestuous history and has been the fodder for envy over the years, unquestionably because of the loveliness of the saint and its status as a “divine portrait” of exceeding elegance and beauty. Cited by Antonio Ponz in his Viaje de España in Seville’s Saint Catherine’s church, as well as by the Count of Aguila, Ceán Bermúdez also referred to it as a “very lovely half-length Saint Catherine shown along with the doorway of the chapel of the tabernacle” in the aforementioned church. In 1810 it was listed in the inventory of the Alcázar among the paintings confiscated by the invading government as by Murillo, in hall no. 11 and with place no. 286. “Another of 1 vara (about 82 cm) high and ¾ wide, St. Catherine”. This piece of information is crucial in relating it to the canvas purchased by the Foundation, as the measurements listed in the inventory dovetail with the 82.5 x 62 cm of our painting. When he published his monograph on Murillo, Diego Angulo included this information in his catalogue, although he did not relate them to any known work. However, even though he gave two entries for Saint Catherine and for the inventory at the Alcázar, he was unsure whether they were the same, as in fact they were. When writing in 1844 about Saint Catherine’s church in Seville, González de León spoke about the eminent paintings in this church, “which have recently been lost due to carelessness or avarice, a half-length of Saint Catherine by Murillo…”.

The definitive proof to confirm that this Saint Catherine is the one stolen by Soult comes from two sources. One of them is the letter recently published by Ignacio Cano from the parish priest of Saint Catherine’s church, José Ollos Limón, dated the 20th of January 1819, in which he bitterly complained to the San Fernando Royal Academy of Fine Arts: “that last year, 1811, the French removed from my church on the orders of Marshal Soult an original painting of the effigy of Saint Catherine by Murillo worth a great deal of value and esteem. The French have taken the painting that the petitioner is reclaiming, which measures around one vara high and not as wide. The petitioner has asked the extraordinary ambassador in Paris, Mr Pedro Gómez Labrador and later the ordinary ambassador, the Honourable Mr Peñalada, for the painting….”

Previously on Art is Life:

Pietro da Cortona – neglected Italian Renaissance painter, along with other Baroque Masters on view in Lecce. Do yourselves a favor and watch the youtube video in full screen.